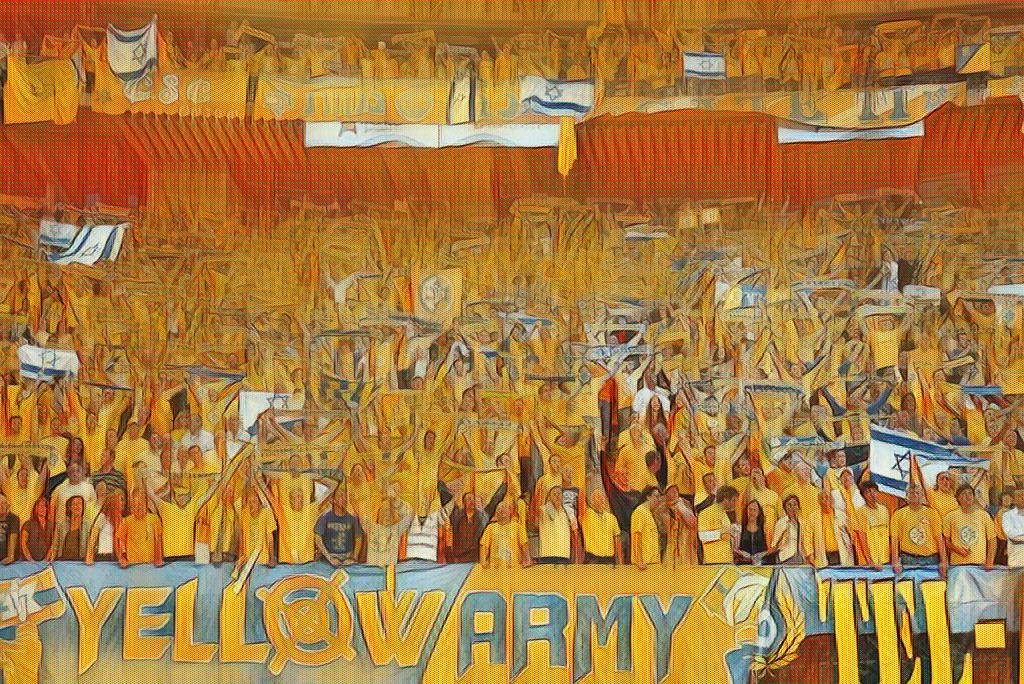 We would like to welcome Yifah in the Red Point Guard community.

Yifah is a 29 years old woman from Jerusalem, Israel. She is a Maccabi fan since she was 14 years old – the year that Maccabi hosted the 2003/4 Euroleague final four in Tel Aviv. Her very first game, which she watched “by accident”, was the famous game against Zalgiris Kaunas in 2004. Maccabi won that game due to a miraculous 3-pointer by Derrick Sharp with only 2.2 seconds left on the clock, that led to a win in overtime and secured for them the spot at the final four that year. Since then, Yifah follows Maccabi in particular, and basketball in general, and tries to learn everything about the orange ball that we all love so much.

We have asked Yifah three questions to help her share her point of view regarding Maccabi, Euroleague and Olympiacos.

Make an assessment of Maccabi’s 2018/19 season – Pros and Cons, what do you keep and what do you want to forget from this period.

The answer to the question whether 2018/19 season was a successful season for Maccabi Tel Aviv is complicated. I think it depends on the context, and therefore I want to examine Maccabi in three different competitions: the domestic Israeli league (“Winner League”), the Israeli cup, and of course – the Euroleague.

To summarize, Maccabi obviously had more expectations from this season before it started, but given the circumstances they succeeded to compete almost as hard as they could. I hope that next season, with Sfairopoulos staying on the lines and the backbone of the team remaining (with some required improvements) – next season will be better, and maybe finally Maccabi will reach to the playoffs after 4 years.

What is your opinion about Olympiacos in general and specifically for 2018/19 Season?

In the eyes of an objective basketball fan, Olympiacos was always one of the biggest and most powerful clubs in Europe. With 3 European titles, 12 local championships, 9 Greek cups and a big and loud crowd – it is only natural to find them among the leading teams in the Euroleague every season. Considering this, 2018/19 season was very unusual, and I think everybody will agree that it was a bad season for them in all of the competitions – without winning any title. Of course, in respect to the Greek frameworks it was not only due to basketball but also due to Greek Basketball Federation politics, as you all know very well.

The season began with a lot of expectations: Giannis Sfairopoulos left after 4 seasons, and the club signed a big name: David Blatt, one of the most crowned coaches in Europe, who won the Eurocup championship with Darussafaka only one season before. I know Blatt very well from his time at Maccabi, and no doubt he is a great coach. However, the situation at Olympiacos didn’t work out very well. David is very different coach from Giannis, and I think it was hard to the Greeks. I remember a press conference after one of the first Euroleague games, in which Olympiacos did win, but all the questions of the journalist were about the defense: traditionally, Olympiacos is known for its tough defense, but David is much more an offense coach and that was hard to process for the fans and the journalists in Greece.

I think that the turning point of the season was the Greek cup. Until then, it looked like Olympiacos was the most successful team in Greek that season, both in domestic league and in the Euroleague, while Panathinaikos didn’t have a good season: they were at the bottom of the Euroleague table and fired their head coach. However, after the explosion of the semifinal game in the Greek cup, everything changed. The greens took the drive from the Greek title (whether they deserved it or not), and began to win in the Euroleague as well – until they managed to reach to the playoffs at the last moment (after almost everybody thought their season was over).

Olympiacos, on the contrary, began to decline: parallel to their continued struggle against Panathinaikos and the referees in Greece, which eventually led to their fall to the second division, they also lose a lot of games in the Euroleague – until they were left out of the playoffs. I remember that all of us, Maccabi fans, looked at the schedule of Olympiacos at the last month of the regular season and thought that they will undoubtedly be at the playoffs, because almost all of their remaining games were against weak teams. It was a very big surprise for us that they were left out of the playoffs at the end, and marked a low point in their season.

The continuation of the struggle against Panathinaikos and the Greek referees resulted in the relegation of Olympiacos to the second division in Greece, and things are very vague right now. I can’t and don’t want to judge Olympiacos’ decisions, since I’m not familiar enough with all the details. I did hear from our contemporary coach and Olympiacos late coach, Giannis Sfairopoulos, that the decisions were made after many attempts to change things in other ways, and that the management felt like they didn’t have any choice but to take these drastic steps. I’m well familiar with injustice in our Israeli league as well, and how hard it is to change inappropriate situations, so I can understand that sometimes you have to use a heavy weapon to fight against it.

However, I pray that everything will be arranged soon and that no long-term damage will happen neither to Olympiacos in particular nor to the Greek basketball in general.

What are your thoughts regarding Euroleague 2018/19?

I think that 2018/19 season in the Euroleague was different from the first and second seasons since the new system began. On one hand, the feeling was that the Euroleague as a whole had been weakened. A lot of teams were not deserving the position of the Euroleague: Gran Canaria, Buducnost and Darussafaka belonged to the Eurocup rather than the Euroleague level, and also in the strong teams there were some weaknesses a lot of times. I think that part of the reason for that is that many good European players left to the NBA, the G-league or the big money in China (although it seems that next season will be different in that aspect).

On the other hand, the competition was much bigger, and it was very fun to watch. The best example of that point is the struggle to reach to the playoffs: until the very last round, the last 3 spots were still available, theoretically more or less, to 7 different teams (!); since the changing of the system in 2016/17 season it didn’t happen, until this year. I think it’s a good thing that creates more competition and interest. I hope that it will continue also next season, even though it seems like some teams are going to be much stronger next season.

This site uses Akismet to reduce spam. Learn how your comment data is processed.